Additional notes from my notebook I didn’t enter into Goodreads:

Defining exactly who was a peasant was not straightforward, though it can commonly be defined as someone exploited by the elite and living in a rural area. Since the 14th century the word for peasant was “krest’yanin’ = one who has been christened. Another term is ‘Muzhik’ = little man. 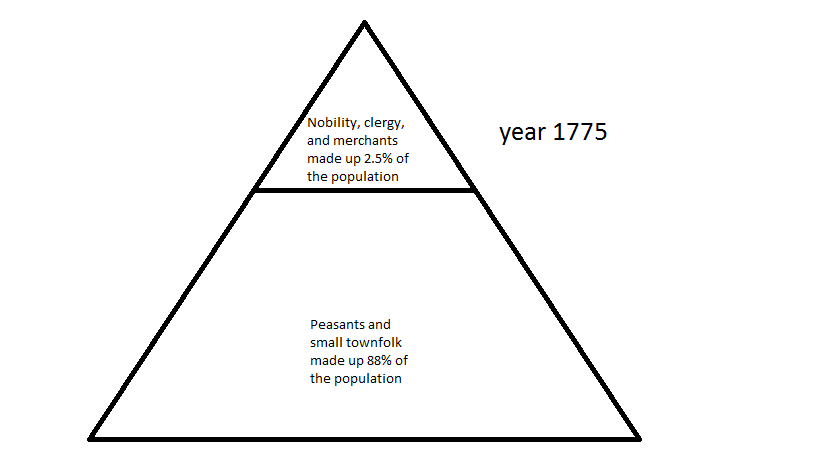 From 1705 right up until the revolution there were annual levies of recruits into the Army and the poll tax was carried out from 1724 – 1883.

Serfdom ended 1861. For the previous 200 years the nobility (and even Russian Orthodox Church) owned serfs.

Peasants had virtually no representation. Hunters, gatherers, and nomads were not considered peasants, but they too had no rights.

Gogol’s Dead Souls was published in 1842 so the 1833 census is the closest census describing the serfs in that novel:

Before 1860 there were 2 categories of peasants:

Death rates in the European section of Russia from 1866-1900 was 25% – 30% of all infants dying before 1 year old. 50% did not live to 5 years old. These numbers are probably representative of the entire century. Death rates for everyone else could have been as high as 38 per 1000 annually (2 per 1000 lower than the birth rate).

Life expectancy at birth was 24.8 for females, 29.8 for males, though if you reached your teens you would probably live to your 50’s or 60’s.

Main causes of death were diarrhea, dysentery, influenza, measles, smallpox, syphilis, and typhus. Crowded houses contributed to this as did eating mouldy rye (rye was a staple food) and this caused toxic aleukia.

Until the late 17th century most Russians lived in the forest regions and not so much in the steppes.

Under Ivan the Terrible in the 1550’s, the Russians threw off the ‘Mongol Yoke’, left the forests, and began stelling the steppes which were now clearing of Mongol hordes.

Russia had been (and you could argue continues to be) a nation of people who had been ruled brutally.

Crimean Tartars – armed by their allies the Ottomans – were not conquered until the late 18th century.

To subjugate these steppe peoples, the Russians continually shifted alliances and played local faction against each other in order to protect their peasant farmers. This could explian the vast territories controlled by the Russian estates.

Peasants migrated and settled only when it was either necessary (Aksakov writes about how his serfs didn’t like leaving their land – Tolstoy examines this, too with Mary and her serf troubles) – or because they were moved by the government to the latest frontier:

The Russian state was doing something similar to what the American’s did by persuading settlers from the lower orders (not serfs, however) to move to the ever expanding frontiers. They encouraged this with land grants, loans, exemptions from taxes and military service for the peasants.

It was not uncommon for peasants to run away to the far off frontier because of a bad harvest, an epidemic, or to escape prosecution from the state or a cruel landowner.

Settlements could often look like larger villages “that take advantage of high river banks with commanding views, or concealed settlements in patches of dense woodland”

Because steppe soil was not always very fertile, peasants supplemented their income with handicrafts and other non-agricultural activities.

“Serfdom is the legal expression of one of the means by which the ruling group in a peasant society makes sure that they get as big a share as they can of the product of peasant labor.” R.E.F. Smith and Rodney Hilton, The Enserfment of the Russian Peasantry, Cambridge, 1968, pg.3

Peasant = members of a subordinate stratum of rural society

Serf = category of peasant = a seignorial peasant and were legally bound to a plot of land and to the person of the landowner. They were subject to his (or her) administration and judicial authority, and who passed their servile status on to their children.

1649 the law code said that peasants were not only tied to the land but to the land in perpetuity (forever).

By the 18th century landowners could buy and sell the serfs, move them to other estates, and demand obligations from them

Slave/Serf = A slave is personal property, a serf is considered a citizen of the state and so the state does have some authority over the serf.

How did peasants become serfs?

The state will give you land IF you serve:

Serfs either performed labor or paid dues – sometimes both

Landowners set aside part of their estate to be cultivated then allowed the serfs to use the rest of the land.

Landowners who did not live on their estates required the serfs to transport the fruits of labor to the landowner.

In the early 19th century the amount of and the serf was required to work for the landowner was equal to 4 days labor per week. This is about 7-8 acres. The other 3 days were allowed for the serf. However, they had to perform certain tasks – not just “work” 4 days a week. For example they might be tasked with plowing X amount of land today or Y amount of sheaves needed to be reaped: a task list.

Some landowners were so harsh a serf might only have nights, Sunday’s, and holidays to work their “own” land.

By 1853-56 during the Crimean War the currency began to lose value.

The state had a monopoly on items such as salt and vodka and they marked up the prices and the burden of paying this fell on the peasants. In 1812 this was no longer the case with salt, but distilled alcohol continued to be treated thus until 1863. 33% of the state’s revenue had come from distilled alcohol = that’s how important it was to Russian society. In the late 18th century a peasant averaged 2 paper roubles per year on vodka (twice their poll tax).

Peter The Great used peasants to build St. Petersburg, work the mines, and build the Navy, but they were forced slave labor.They did receive a plot of land but were never-the-less highly exploited.

Conscription – regular conscription began during the Thirteen Years War with Poland: 1 recruit was taken out of every 20-25 households. Peter The Great, on the eve of the Great Northern War with Sweden implemented military service for life. In 1793 it was lowered to 25 years. Nobles were also required to serve for life (as officer, of course) until 1762.

Most men conscripted did not return home to their estate meaning they did not produce more children which was a drain on the population.

In 1719 Peter The Great introduced internal passports and so peasants could not leave their place of residence without these documents.

The Russian army was usually billeted in peasants homes (to maintain the cost of a standing army). These peasants were exempt from the poll tax but had to live under military discipline. In 1831 a revolt broke out because of the military’s harsh treatment.

War usually meant a higher burden on the peasants.

In the last century of serfdom, “it can tentatively be concluded that Russian peasants were compelled to hand over to the ruling and landowning elites half of the product of their labor.”

Peter The Great: “The husbandmen are the arteries of the state which is nourished by them as the body is fed by the arteries. For this reason they must be cared for and not burdened to excess but rather protected against all assault and damage” (this theme was echoed by others in power, too)

The elites had a self-interest to not harm/abuse/over-exploit the serfs. This obligation was very one-sided, obviously. The state did struggle to get the landowners to actually look after their peasants

The tsar saw himself as a paternal figure who cared for all Russians as if they were family. (very general statement)

Starting with Peter The Great the state tried (not very successfully) to limit or end the sale of peasants separately from the land. Remember that peasants were allotted their “own” land (in return for dues to their landowner) and this land was granted to the landowner as a favor for service to the state.

The state would postpone or reduce taxes in years of famine or a crisis (Napoleon).

Landowners had no choice but to go along with the state when it reduced obligations from the serfs.

In difficult times in the late 16th and early 17th century, peasants would willingly become serfs in return for food and protection.

In the early 19th century after a number of bad harvests (such as, but not limited to after the dates of 1822, 1834) new measures were introduced for famine relief by creating reserve granaries which the peasants stocked as insurance against future shortages – scene in War and Peace when Mary tries to get the serfs to use this grain unsuccessfully since they fear she’s trying to take their rights away (they were not quite serfs in her case).

In 1819 Ivan Yakushkin offered to free his serfs and rent them the land. The peasants rejected it, called him ‘little father’ (batyushka), and said they preferred the old ways adding ‘we are yours, but the land is ours’

Lev Alekseevich Perovski implemented reforms to better the lives of his serfs in hopes it would increase production and revenue all while not overburdening them. He implemented new methods of farming and introduced communal cultivation to stock grain reserves in times of need. He moved overcrowded peasants to lesser populated land. The results were mixed and even aroused suspicion in the peasants, but these were the models of reforms in the years to come.

Later state reforms by Pavel Kiselyov tackled the problem at the state level by restructuring the administration that oversaw serfs – he tried to get rid of corruption and tried to reward competence of good landowners. He saw education as a key to improving the serfs as well as providing quality medical care. He reformed conscription to stop the dregs of serfdom from going into the army (landowners could get rid of bad serfs this way). The quality of these reforms is uncertain.