I thought it might be fun to do a map of some of the connections found in the Madame Butterfly opera and explore how these relationships relate to historical and materialist criticism. I stuck to only a few major relationships, however many, many more could be explored. I had also intended to do a map for Pinkerton as well, but Butterfly’s alone was so in-depth that I’m just sticking to this one example. I intentionally left out Pinkerton and Sharpless (and their corresponding connections and nodes) so I could limit my focus to that solely of culture / society / the state (the power structures). 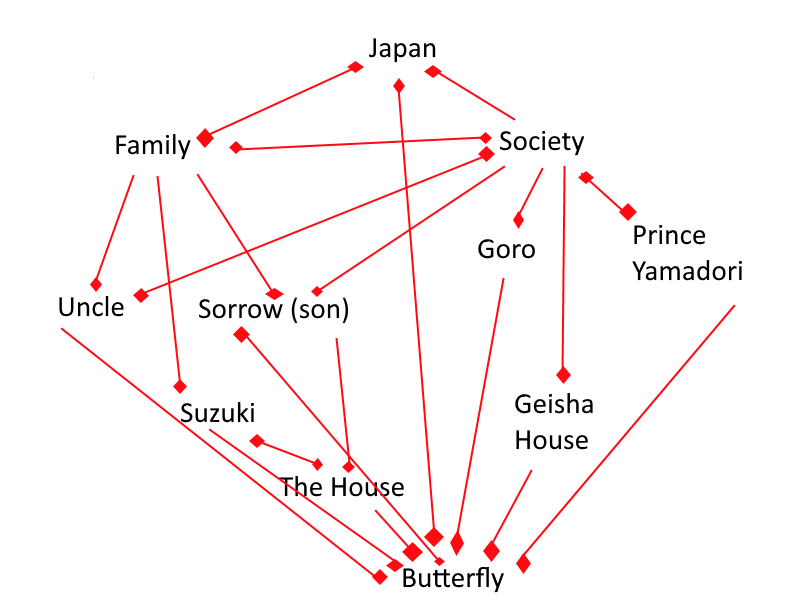 For Butterfly’s map of power relationship nodes and connections I placed Japan at the top and Butterfly at the bottom since I felt this best explains the pressures Butterfly feels in the opera and this gives us a good visual shorthand visualizing how complicated her situation is as well as how powerless she seems to be with so much weight bearing down on her. Marx explains how the individual can often feel alienated or oppressed from the world in which they are participating and this map shows how Butterfly might feel about the world / society she wishes to divorce herself from.

As we learned at the beginning of the unit our condition is affected by our environment and shapes how we interact with the world. In Butterfly’s case she is greatly influenced by her being Japanese, as we see with a line directly from Japan to Butterfly, and this is a major factor in how she interprets her world. Even her desire to break free of this power structure is informed by her Japanese-ness, and not an American-ness (such as the ideal of American individualism / rebelliousness) of which she knows very little outside of magazines and Pinkerton’s relationship to her. In this sense Japan is what Marx calls the base and everything that follows (below on my map) is the superstructure of which that society (Butterfly’s world) consists.

I’ve next made a split below Japan into Family and Society. These are smaller units of the larger Japan and are directly related in both directions, but they are distinct in that Butterfly would identify with each in different ways. For example Suzuki and her son, Sorrow are part of her intimate network of caregivers and providers while her Uncle, though a blood relation (unlike Suzuki) is a reminder of the pressures of Society. Both nodes also represent unique ideologies: Family is that which Butterfly is trying to create anew – the dynamic of Butterfly, the servant Suzuki, and the fatherless child is not a traditional family – and Society is that ideology from which she is trying to free herself from, as we can see with nodes such as Goro, Prince Yamadori, and the Geisha House all falling under that heading.

Other connections we could make might be economic, such as the Geisha House which can provide her with a source of income if she is willing to submit herself to that life again, but also the economic situation of her own House which, with the money quickly running out, is a source of stress and oppression which, if unresolved, could force her, literally, from one house (her House under the Family node) to the other (the Geisha House under the Society node).

All-in-all this map represents the state and State in which Butterfly lives in. The state is broken up into two categories: the repressive state apparatus which coerces power, such as the nodes Goro and Prince Yamadori, both of whom actively try to influence her behavior. We could also look to the dream sequence in the film as a coercive apparatus where the black and white newsreel imagery of a modern and powerful (military) Japanese society is, as Freud might tell us, is actively influencing her through the subconscious.

The other category is the ideological state apparatus and an example from our map that fits here would be the Family. The Family is, of course, related to Society in that Society is informing the Family members how to behave (as Japanese) – as we see with the Uncle’s influence / warnings – but it is also a separate node in this case because Butterfly is part of a non-traditional family – she is married to a foreigner, she is a single mother, and her only close companion is someone from a lower class, Suzuki. This ideological state Butterfly exists in also helps us understand how, as Althusser questions, change can take place within the State (capital “S”) because we can see how her circumstance isolates her and informs her decisions to insist on this Family ideology over the Society ideology.

Yet even though she is favoring one ideology over another, we can see how these ideologies are interpolated and how Butterfly is an interpolated subject (and Subject) within the overall ideology of Japan / Japanese-ness. Althusser wonders how is it that societies remain stable and why do people chose to remain submissive to their state and State, and these interconnections explain how a person is defined by their state (State) and how complicated it can be to extract oneself from these ideologies – if that’s even possible at all.

One final point, and one which is not on our map, is that of the magazines Butterfly reads. For her these magazines are a source of education and information that she uses as motivation (power) to free herself from her current ideological state (and State). This information she has access to runs counter to the ideology of Japanese society by showing how western women should look and behave. She is consciously privileging this counter-narrative (binary) and she is interpreting this information in a way that she believes will give her power. For example, she begins to dress as an American thus privileging one interpretation of Society (American) over another Society (Japan). From this information she has constructed a narrative in which she is the good American housewife and this gives her a power of will to endure the absence of Pinkerton, an absence which is not just emotionally painful, but also economically (the lack of money) and socially painful (the shunning of her Uncle’s Family).

Finally we can trace Butterfly’s discourse, or the limits of her experience as it relates to her state / State. Butterfly’s relationship to the ideology of the State is unique and she seems to be actively rebelling against her condition within the State, however she is not doing so as, say, a modern feminist who is challenging the hegemony (such discourse does not exist for her, even if some of her actions do coincidently align with that discourse). Butterfly’s discourse is chiefly social / societal because her previous life as a practical slave in the Geisha House (which came about because of her family’s fall from respect and a need for money) is something she refuses to return to. She has existed within the machine of Society and she wants to free herself from that oppression, and oppression so powerful it actually took her real name, Cio-Cio-san, away from her (loss of identity via the State). She has seen how alienating and oppressive the State is, she bears the scars of her state, and so she reacts against these states by attempting to forge a new narrative / ideology / identity. Yet her tragedy is that she cen never really escape her state / State and in the end suffers the ultimate alienation of all states: Death